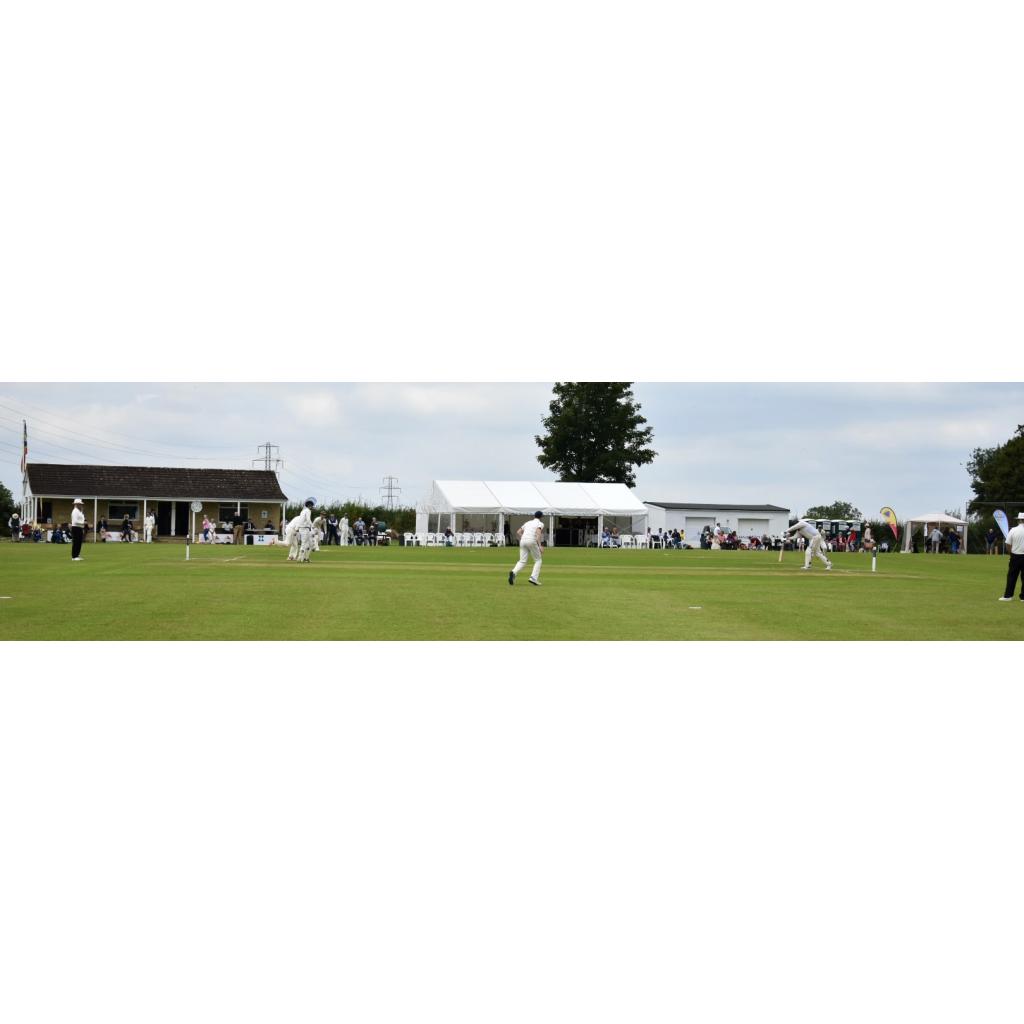 Memories of the MCC match

In early 1970 the Secretary of Purton Cricket Club, Dave Bisset, wrote to the MCC asking if the committee would consider a match with Purton CC to celebrate the Q150th anniversary. It was agreed but, at the last moment, the MCC failed to raise a team. Consequently in 2021 when the MCC team came we were able to celebrate the 150th and 200th! Perhaps it will go down as the longest fixture to start!
So I am delighted to report after such a long wait,  not only a win for Purton over the MCC, in what turned out to be a tight and exciting game throughout, but also, a very successful club event. For those of you who were there I am sure you will agree that the club, once again, held a fun family day with cricket at the heart of the event. If you weren’t able to make it, you missed a treat for all of the senses. As well as the cricket the BBQ, pizzas, bar, cakes, and lunches were superb; the games and bouncy castle provided plenty of entertainment for the children; and then the live music at the end closed off a thoroughly enjoyable day. Below are some memories of the day.

Start of Play 12:30 / 45 overs per side / Uncontested toss and MCC decide to bat first. / Weather : mild and overcast with a slight breeze. Captains: Tom Whittaker (Purton) and Andy Carroll (MCC).

The first ball produced 4 runs for Sebastian Street which thankfully for Purton was not an omen for the rest of the innings. Purton struck first in the third over after trying to take a single and T Lerwill was run out by Fraser Conway and Tom Whittaker. Following the early wicket MCC played well on a good wicket, but Purton bowling led by Aaron Lee and Callum Wright kept the score at a manageable level for the first 23 overs. At that stage MCC had amassed a score of 66 runs for 4 wickets. Adam Woolford had taken 2 wickets while J Gilchriest from the MCC had posted 30.

After a short drinks and sanitizer break MCC came out looking to post a respectable score. E Price hit  33 off 24 balls including four 4s and one 6. By the end of their innings MCC had scored 169 for 8 off 45 overs with the best batting figures for J Gilchriest and Price with 34 runs and 33 runs respectively. For Purton the wicket takers were Adam Woolford (2/40), Patrick Whittaker (2/16), Callum Wright (1/8), Aaron Lee (1/27) and Fraser Conway (1/27).

At the halfway stage Purton required 170 to win off 45 overs.

The total looked like a target that Purton could attack but in the opening exchanges the MCC bowlers certainly took control and had the upper hand. After 17 overs Purton had only managed to reach a score of 46 for 3. Alex Duffell (2), Phil Duffell (12) and Tom Bowler (12) had all departed in the first 17 overs. This meant captain Tom Whittaker joined Elliott Hill at the crease looking to up the run rate. The captain was aggressive and by the time drinks was taken at 23 overs the score was 95 for 3. For the MCC York-Starkey and E Price were the wicket takers, with the latter having two to his name.

Shortly after drinks in the 24th over, the 50 partnership was brought up between Hill and Whittaker, from just 39 balls. However, following the introduction of spin Street trapped Whittaker LBW and he had to depart with the score of 27 off just 22 balls. This brought Dave Allen to the crease who was also dismissed by Street for a duck.

The game seemed very well balanced going into the final 15 overs with Purton being 115/5 off 30 overs. Elliot Hill kept batting with Callum Wright and Hill brought up his well-deserved half century in the 39th over with his 50 coming off 82 balls, as Purton were closing in on victory. However, there was a twist in the tale as Hill was dismissed by Price for 52. His vital 5th wicket partnership with Callum Wright was worth 49 runs.

Callum Wright and Patrick Whittaker brought Purton home with 35 and 9 not out respectively and with 4 wickets remaining and 3 overs to go Purton reached 171 for 6. E Price bowled well for the MCC taking 3/34 off 8 overs.

A fascinating contest between two well matched sides. Above all the game was played in an excellent spirit and really was a fitting tribute to mark Purton’s Bicentennial year. All the players happily stayed after the match to enjoy the food, drink and live music laid on by the club for the members and local community to thank them for their support over the last 200 years.

Pictures of the day Shot of the action with the pavilion, children’s games in the background. Reminiscing matches gone by above were : (Back row from left) John Philcox, Malcolm Morrison, Francis Sheppard, Mike Crouch, Jack Woolford, Robert Quiney and Dave Herbert (front row from left) Joe Gardner, David Bisset, Brian Gunasekera, Dave Woolford and Nadia Quiney - all past members, of whom you will find mentioned in 200 Not Out if you need further details about their individual histories with the club.

Rosemary and Joe Gardner receive a gift of a wooden bench on behalf of their family who, for the many years of have given outstanding service to the club. The bench will be placed where we hope Rosemary and Joe and his family including Nicola, Mark, Sarah, Gus, Megan, and Ellie can enjoy the cricket at Purton for many years to come. To celebrate 200, the local Purton CC

Played a match against the national MCC,

That prestigious club whose home is ‘Lords’ –

Not the ‘Commoners’, with whom they would not cross swords!

A good crowd had gathered before the game had begun.

For there were other amusements, the cricket besides –

A disco after, and the children had slides.

There were some ‘old-timers’ – from yesteryear;

Some came from afar, some from near.

Their memories of playing were crystal clear,

As they quaffed their wine, or a pint of beer.

Food and drink were readily available;

To take away, or to sit at table.

The day was well organised, so everyone had fun.

It almost didn’t matter that it was Purton who won!

As in all sport, one always goes out to win;

But, if one loses it isn’t a mortal sin.

The ‘spirit’ of the game, as one ‘takes to the wicket’

Is that to cheat to win is simply ‘not cricket’!

*Published with the kind permission of Malcolm. This poem also appeared in the MCC members Newsletter